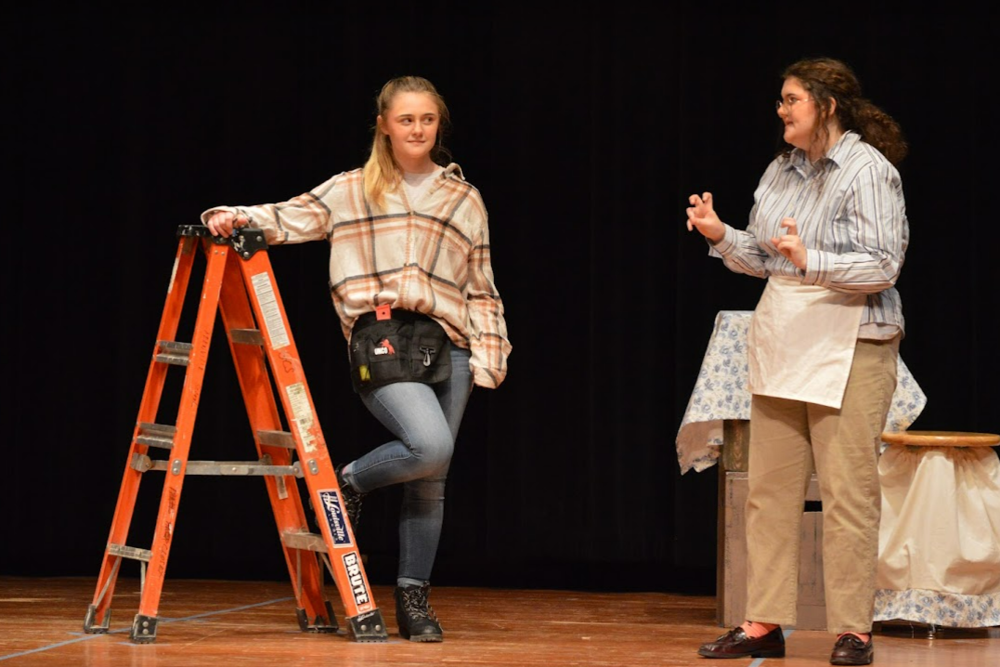 Last weekend, the Greenville Middle School drama club put on a fantastic show for members of the community called “One Stoplight Town,” a play based on, you guessed it, a town with one stoplight.

Taking place between 1998 and 2020, the setting was a busy street corner in small town much like Greenville, and perhaps that’s what made the play so relatable. Centered around the town handyman, Trish, who pops on and off stage to grace her fellow townspeople with life lessons disguised as stoplight metaphors - Claire Schelling did an incredible job portraying such a fun loving, wise character.

However, the true gem of the show was Brody Shaver’s character Melvin, a lifelong stoplight town resident who sat with his wife Clara, played by Maggie Stern, and watched the “hustle and bustle” of the town throughout the show. The audience erupted in laughter numerous times over their quick, witty banter. Additionally, watching the 7th grader portray an old man with hysterically exaggerated facial expressions and body language left the audience gasping for air.

The play followed the lives of many town residents through the years. One of those residents was Bob, a cranky old grocer who took more issue with a stoplight being installed in his town than Melvin and Clara lounging outside his shop every day. Played by Olivia Matott, this character reminded the audience of that one old man that every person has in their lives. Oliva did an amazing job playing a character so far-fetched from her everyday personality, it was a treat to watch her transform so easily into character.

The set was beautifully designed, with props that looked like they belonged to a professional theater. These props were most certainly reminiscent of Greenville, with “Polly’s Shiny Diner” (like Tiny Diner), PNQ Lumber (like GNH Lumber), Loretta’s Pharmacy (like Kelly’s), and a poorly timed stoplight for anyone in a rush, like the one across from the Greenville Park.

There was something in this play relatable to every member of the audience. It was the high school sweethearts, Sally and Jim, played by Emma Diehl and Lucas Bender, who return to the stoplight to remind us that some things simply never change.

It was the runaway kid, played by Clare Ingalls, who just needed to be reminded that leaving a place means you have something to run toward, not from. And it was the prodigal daughter, played by Chloe Uht, who after living a life in the big city returns to remind a younger version of herself that sometimes it’s nice to come back to the One Stoplight Town to slow things down.

It was the owner of a new restaurant, Flash, played by Amelia Stewart, who reminded us that we can still love something we’ve always had, while opening our hearts to something new.

It was Casey, played by Rowan Story, the young lady who feared crossing the street but was eventually was able to face her fears and succeed with a little encouragement from her fellow townspeople.

It was Emma, Sally and Jim’s daughter played by Alannah MacDonald Katz, who was ready to get out of town and head off to college.

It was the police officer, Hannah Cummings, who simply wanted to keep the peace.

It was Polly, played by Alana Cronce, who was the beloved owner of Polly’s Shiny Diner, a reliable small town place to eat, with the best burgers around.

This play was a fun, lighthearted reminder of all the things that makes Greenville special, and it couldn’t have come at a better time. Congratulations to all the members of the drama club, on stage and behind the scenes, for putting on such a wonderful production.

Cast Party, Parents of the Cast

One Stoplight Town, by Tracy Wells. Produced by Special Arrangement with the Dramatic Publishing Company of Woodstock, Illinois.